Marcela Escobari is Biden’s nominee to be the head of the Bureau of Latin American and the Caribbean at the United States Agency for International Development (USAID). Escobari’s past personal and professional ties to associates close to George Soros make this a nomination deserving of more scrutiny.

Escobari was nominated and served in the same position under Barack Obama from 2016-2017. Though this is not her first time at the agency or for a position requiring Senate confirmation, recent investigations reveal troubling connections with past associations involving thousands of dollars that need a thorough examination before she advances.

According to her LinkedIn profile, Escobari led the Harvard Center for International Development from 2007-2016 and served in that position until her appointment to USAID under Obama in 2016.

During that same time, she worked alongside fellow professor and Director of Harvard Kennedy School’s Growth Lab, Ricardo Hausmann. The Growth Lab examines several developing countries and produces policy recommendations based on their research. Donors can influence what The Growth Lab prioritizes through generous grants. One area of funded research by the Lab examined macroeconomic growth in Jordan, a country known for harboring terrorists.

George Soros and his Open Society Foundations are frequent donors to Hausmann and The Growth Lab, giving millions to Hausmann since 2012. In politics, former associates and friends have an undue influence where government dollars are doled out, which makes Escobari’s close relationship to Hausmann and by extension, Soros, especially concerning.

According to Harvard transparent engagement records, Hausmann received millions of dollars between 2012-present from the Open Society Foundations and other entities funded by George Soros.

When previously criticized for taking money from Soros, Hausmann publicly defended Soros and the money received in a public posting on his personal Facebook Page. The opening reads, “My relationship with George Soros” and continues by comparing the rise of Nazi Germany  and the Holocaust to Americans that question the integrity of the 2020 Elections. 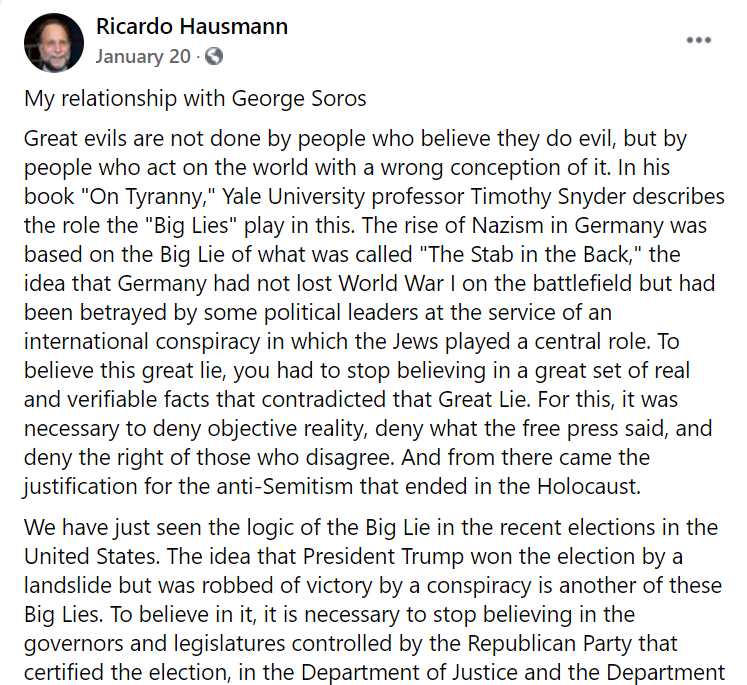 He also stated that the work which George Soros started was continued by USAID, the same agency of Marcela Escobari is nominated for: 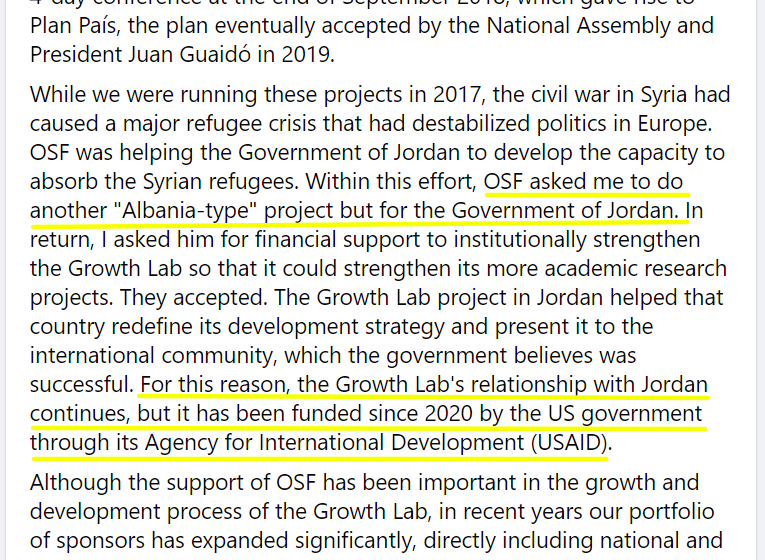 It’s clear Hausmann has no intention of breaking ties with Soros’ money anytime soon and now that he’s receiving government funds from USAID we must look into his past and present relationship with Escobari.

What needs further scrutiny is his private consulting partnership they had together.

Both Hausmann and Escobari worked closely together in a professional capacity at Harvard. What is less well known is that at the same time Hausmann received millions in grants from Soros, both he and Escobari were managing partners of multiple LLCs of their own creation.

One ethics filing shows Escobari received $84,000 in consulting fees as a managing partner with Hausmann while she was employed at Harvard.

At the time, Escobari only needed to report her income from the current and previous year, which was $84,000. There is no knowledge of how much she received under the ambiguous “consulting” umbrella and for what services during the entire life of the .

According to the Massachusetts Secretary of the Commonwealth, both Hausmann and Escobari filed as managing partners for two LLCs during 2011-2015. The first was named Growth Ventures LLC and the second, as it appears on Escobari’s ethics paperwork, Ricardo Hausmann Consulting LLC. 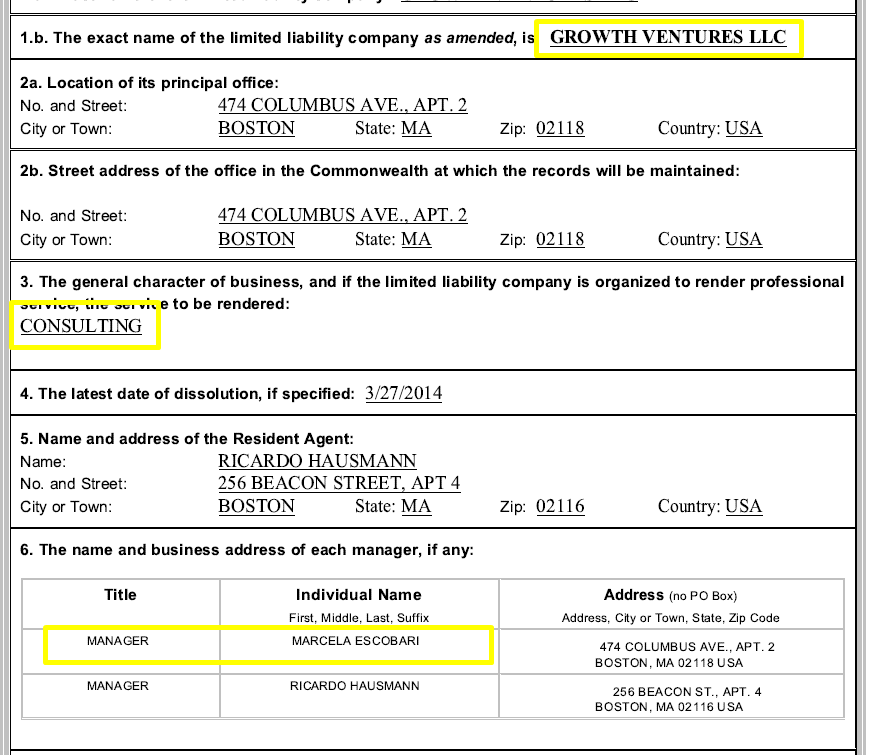 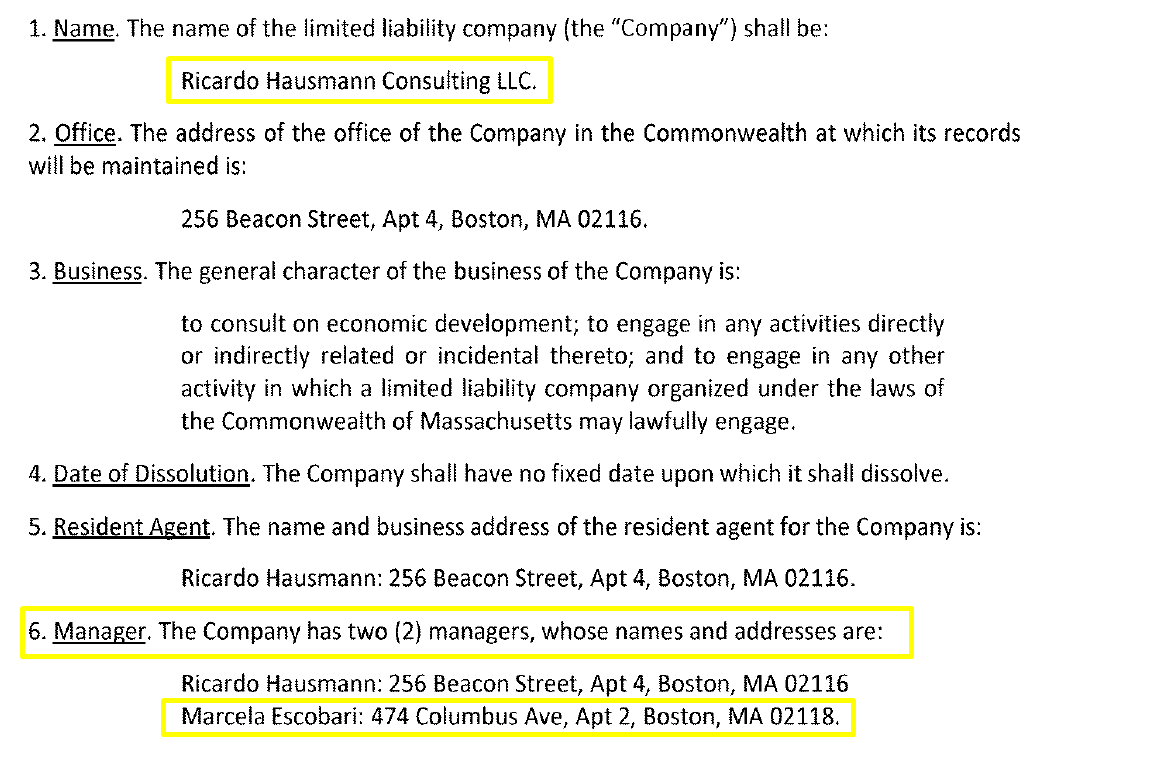 Both Escobari and Hausmann closely worked at Harvard on issues of economic development and research as listed in their filing. George Soros through the Open Society Foundations supplied millions for this very purpose.

It appears that the generic private consulting work of Escobari also covers “economic development” activities as well, as listed in their Massachusetts Certification of Organization.

We hope that Escobari and Hausmann did not create a private slush fund for themselves from their leadership posts at Harvard. We also hope that Soros’ money did not trickle down to benefit both Hausmann and Escobari personally. However, since the LLCs are private organizations we do not know the source or purpose of the reported $84,000 that Escobari received prior to joining USAID her first time. Only the Senate can obtain the answers on Escobari’s past associations and financial dealings, and they should.

The problem with Marcela Escobari’s nomination is we just don’t know the answers to these questions and more. Americans deserve to know who is behind the scenes influencing billions of dollars of foreign aid should she be confirmed. We should also be certain that Escobari’s past work was ethical and not a scheme to enrich herself.