The confirmation vote for James Kvaal, Biden’s pick to be Under Secretary at the Department of Education, stalled in the Senate as policy negotiations on student loans continue. Kvaal, who most recently served as the President of Institute for College Access & Success, was mired in allegations of insider trading and collusion with Wall Street short sellers while at Department of Education under Obama from 2010-2011.

Should he be confirmed, Kvaal would lead the Department’s development of higher education policy, which is why he is Senator Elizabeth Warren’s bargaining chip for concessions on student loan forgiveness with the Biden Administration.

The American Accountability Foundation (AAF) stands with Sen. Warren to support delaying the vote on Kvaal. Warren seeks a better deal on student debt and AAF wants a thorough investigation into Kvaal’s involvement of the controversial rollout of the Obama era gainful employment regulation that enriched Wall Street cronies during his tenure as the Deputy Under Secretary at Education.

Recently, Biden announced his intention to bring back the gainful employment rule that regulates for-profit colleges, undeterred by the 2010-2011 Obama scandal surrounding the rule. What is more, he nominated a central figure in the scandal, James Kvaal, to lead the policy development as Under Secretary.

The scandal involved senior department officials, including Kvaal, sharing confidential information about the gainful employment rule prior to public release.

Sen. Burr commented on the scandal during Kvaal’s nomination hearing,

“I know that my colleagues on the other side of the aisle would be screaming from the rooftops about a nomination of someone who’d been involved even remotely with providing deliberative and confidential regulatory information to short sellers on Wall Street.”

In 2011, federal investigators probed whether top Education Department officials violated the conflict of interest and ethics rules by allegedly sharing information with Wall Street short sellers and an outside advocacy group about new regulation impacting for-profit colleges. Short sellers were betting against for-profit colleges on the basis that the gainful employment rule would cripple the industry.

Kvaal’s proximity to the unethical behavior came to light in 2011 when an independent watchdog group sent a detailed letter to the Department of Education revealing documents released by the Freedom of Information Act between hedge fund managers and high-ranking department officials.

On July 19, 2011, email records show that the infamous Wall Street short seller, Steve Eisman, emailed a Department of Education budget staffer David Bergeron to express concern that the department might back down on enacting a proposed gainful employment regulation on career colleges.

At the time, Eisman maintained a high-profile short position against publicly traded for-profit colleges, meaning that he would profit from any government regulations that might negatively impact the stock price of those schools. 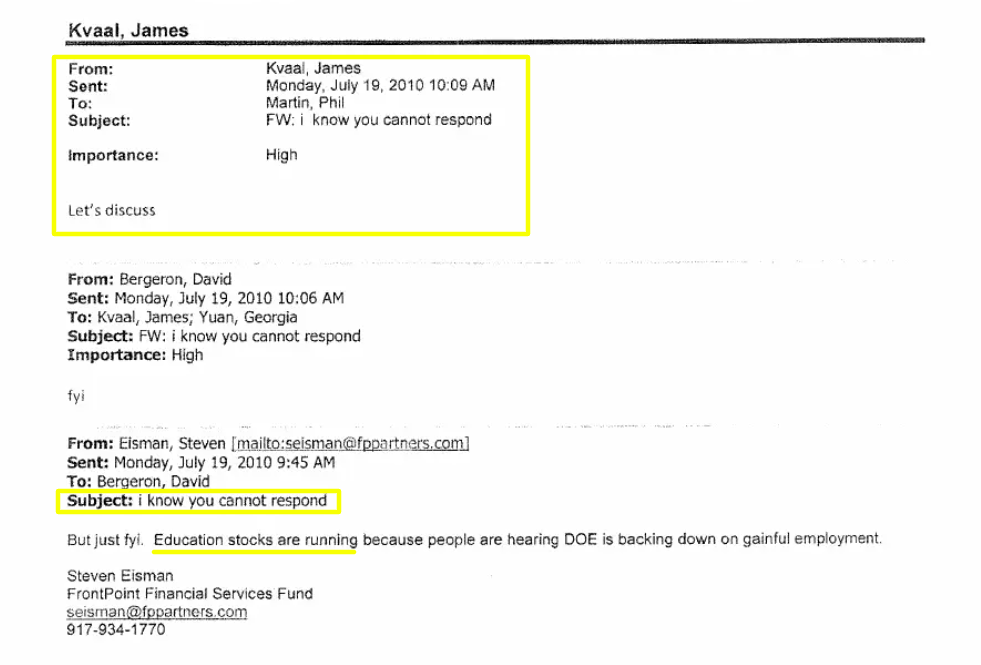 The subject line of Eisman’s email reads “I know you cannot respond”, alluding to the restrictions surrounding the negotiated rule process that prohibits the department from discussing the rule with outside entities.

Instead of ignoring the email, Kvaal forwarded it to Phil Martin, a senior aide to Education Secretary Arne Duncan, adding “let’s discuss.”  The discussion of sensitive topics offline is a common tactic to avoid Freedom of Information Act disclosure requirements.  In fact, there is no record of what was ever discussed, but it is clear that Eisman’s email spurred the top officials at the department to take action.

An analysis by another oversight organization noted that senior officials:

“appeared to fully grasp the weight markets attached to the timing of their proposed rulemaking as well as their own internal deliberations, even as they handed out tips to short sellers.”

And this wasn’t the first time Kvaal communicated with Eisman regarding impacts of government regulations. While at the White House in 2010, Kvaal and Bergeron received an email from Eisman urging the administration to maintain a stricter rule against for-profit colleges.

Other independent watchdogs concluded that Kvaal and others “carried out a planned leak of the proposed gainful employment regulations to a number of outside individuals and groups in advance of the regulation’s public release.”

This advance release would have reassured short sellers and partisan allies that DOE was not backing down on gainful employment.

In the course of discussing outreach responsibilities with Kvaal, specifically on who they may have forgotten, Bergeron states in an email: “Also there’s Eisman/Schluman/et al but Eisman is a short-seller anyway you cut it and anything you tell Schulman gets to Eisman.”

In a letter addressed to Secretary Arne Duncan and to Robert Khuzami, the Director of the Securities and Exchange Commission, the Chief Counsel for a watchdog group explained:

“Schulman is Diane Schulman of the Indago Group, a small research firm employed by  Mr. Eisman and his hedge fund, Front Point Partners, to obtain information and entrée to Washington lawmakers for Mr. Eisman.…on the same day Mr. Eisman initially contacted Mr. Bergeron with an update on how education stocks were faring, Mr. Kvaal quickly located the analysis prepared by the investment banking firm Signal Hill that apparently was fueling market speculation that Education had made the proposed gainful employment rule “more accommodating” to the for-profit education industry…Mr. Kvaal, again with no explanation, promptly characterized this assessment as “not all accurate information.”

Leaking information to short sellers or their paid consultants, either directly from Education officials or through allied third parties, would have provided them with reassurance about the market impact of the upcoming regulations, and would have given Eisman an opportunity to increase or adjust his market position if he so wished.

These matters raise troubling issues about the actions of James Kvaal. The American public deserve answers to the following questions:

As explained earlier, the findings of the previous investigation and other government records revealed numerous instances of inappropriate contact with short-sellers and interested groups during Kvaal’s time at the department. Kvaal’s controversial role in these matters deserve further scrutiny given the Biden administration’s efforts to restart work on gainful employment regulations.

AAF urges all Senators to outright oppose the James Kvaal nomination given his previous involvement with the short-sellers controversy. This should be natural for Senators like Warren who “set her sights on the short-selling hedge funds” just a few months ago.