In June, President Biden announced the nomination of David Weil to head the Department of Labor’s Wage and Administration Office. The position is charged with protecting the pay of all workers. An American Accountability Foundation investigation into his suitability to serve in office brought to light several disturbing facts which should disqualify him from holding this office.

Apart from his activism related to the gig economy, Weil is likely best known for his activism on increasing the minimum wage.  Unfortunately, Weil is not willing to walk the walk when it comes to insisting on a $15/per hour minimum wage.  Despite Weil likely having numerous job prospects after leaving the federal government, Weil chose to land at Brandeis University taking a $370,163 per /year salary.

Paying Their Students Below $15 / hour

Despite Weil being one of the leading advocates for labor unions and increased wages for workers, Weil chose Brandeis which refuses to pay its workers $15/hour.

David Weil, who Biden announced as a federal nominee last week, has backed a $15 an hour wage while not instituting such a policy at Brandeis, where he is a dean and professor. The group that alerted The Federalist to this contradiction is the American Accountability Foundation.

According to the Office of Student Financial Services, the minimum wage at the private school in Massachusetts is $13.50 an hour, the same minimum wage set by the state. Given the dean’s influence and position as a staunch progressive, it is curious why he would work at a school that does not provide the same compensation he seemingly determines is necessary.

No Union For Brandeis Students

Further adding insult to injury, when Weil joined Brandeis, the university did not even have a collective bargaining agreement in place with the union representing its graduate students.  As his biography notes, “David Weil became the Dean and Professor of the Heller School for Social Policy and Management at Brandeis University in August 2017.”

When Weil joined the school it had been over a year since the National Labor Relations Board had decided that graduate students were allowed to have a collective bargaining agreement and it took them over a year to get a contract together even with one of the nation’s leading labor scholars on their faculty.

The Brandeis agreement, if approved by union members later this month, will be the first contract for graduate students across the country whose union bids relied on that 2016 NLRB decision.

“We are pleased to report that after one year of hard work, the bargaining teams have reached tentative agreement on a collective bargaining agreement that will soon be put to a ratification vote of bargaining unit members,” Brandeis said in a statement.

Labor unions need to ask why one of their leading supporters was willing to the take a $300,000 a year job at a university that didn’t even offer all its employees collective bargaining rights.

Hypocrite on the Environment

In 2015 Weil wrote an article lecturing Americans on the need to undertake expensive retrofitting to update their homes for energy efficiency, both for the environmental impact of the upgrades, but also to deliver a boost to the energy efficiency weather business. Weil notes:

A study by McKinsey (which should be read with some caution) suggests that to ―unlock energy efficiency in the US economy‖ in terms of retrofitting, will require huge growth in the scale of the sector. They note that currently there are about 200,000 retrofits in the US each year. If one hoped to capture what the McKinsey study deems ―full efficiency potential‖ arising from retrofitting roughly 70 million homes where substantial improvements could be made over a 10-year period, the number of certified providers would need to increase on the order of 30 to 40 times the current number of certified contractors, that is, from an estimated 40,000 currently to 1.5 million by 2020 (Granade et al. 2009, pp. 38-39). As we discuss below, it is hard to imagine this kind of scale given the way that such markets are currently organized.

This is particularly interesting when one notes that Dr. Weil was confronted with a perfect opportunity to do exactly what he was advocating for, retrofit his home with an energy efficient heating and cooling system.

In 2007, Weil undertook a $115,000 renovation of his million dollar home in Belmont, Massachusetts.   If Weil was truly committed to energy efficient heating and cool, this would have been an ideal opportunity for him to lead by example by installing a new energy efficient renewable energy HVAC system in his home, instead he decided to remain with what many progressives consider a deeply problematic fuel, natural gas.  As the paperwork associated with his renovation notes, he chose to maintain the sub-par gas boiler heating system. 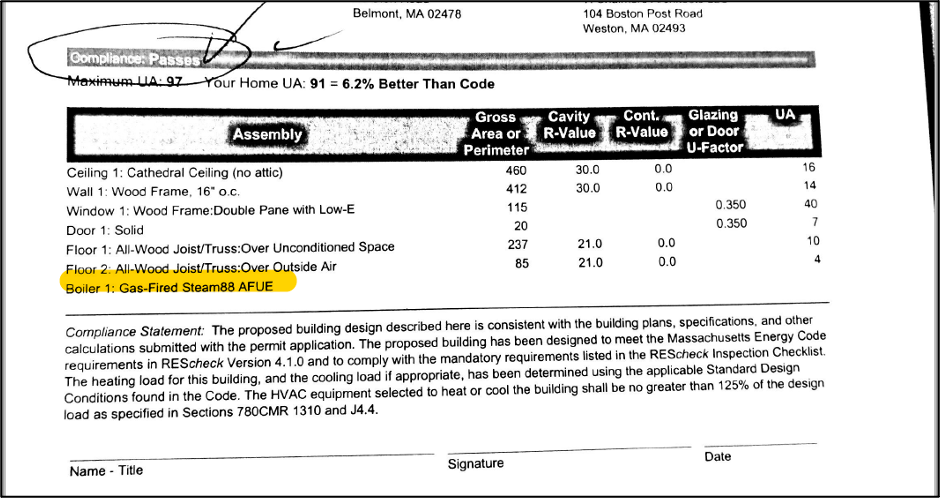 Weil for example could have used this as an opportunity to replace his “dirty” gas boiler with a “cleaner” solar powered system.   In fact, Belmont, Weil’s hometown is quite proud of the fact that they have had very significant adoption of solar energy in the community.

AAF staff have reviewed the building permits granted for Dr. Weil’s home, and confirmed from recent imagery of Dr. Weil’s home shows, he is not one of the 300 solar homes in Belmont that has gone to the time and expense of installing solar panels on their roofs.

Review of David Weil’s resume shows that he’s never worked a day in his life in the private sector.  Despite being nominated to position that will regulate wages and conditions of employment for businesses across the country, David Weil has never had to face the challenges of meeting a payroll, negotiating health care policies, or balancing a business checking account.

David Weil is going to be called on to make a number of important decisions regarding labor-management relations in his position at the Director of the Wage and Hour Division at the Department of Labor.  His decisions should be unbiased and focused on what is in the best interest of the American people, unfortunately as a former labor union employee it is unlikely that he is going to take an unbiased view.  As the records below show, Weil, is a former labor union employee getting tens of thousands of dollars in hand outs from the AFL-CIO and other unions for speaking fees.

Dr. Weil’s financial disclosure forms reveal after taking the helm of the Heller school at Brandeis, Weil has kept himself firmly ensconced in the activist community, despite supposedly having a major school within a university to run.   As his financial disclosure report shows, he’s been on the payroll of anti-gig economy groups during his time as the head of Heller, getting paid $9,600 in consulting fees from “The Worker’s Lab” an activist group in Oakland founded by labor union leaders, on top of his outrageous university salary.

While at the helm of the Heller School at Brandeis, Weil has used his position to foist a radical left wing agenda unto the students at the university by pushing a radical Critical Race Theory agenda.

For example, Weil was part of the team that recommended forced Brandeis students to read Keeanga-Yamahtta Taylor.  From the Heller school’s website:

Throughout the year, beginning with incoming students at Orientation, we will read and discuss “From #Black Lives Matter to Black Liberation,” by Keeanga-Yamahtta Taylor, published in 2016.

Keeanga-Tamahtt Taylor is a radical leftist who hates the police and white people.  She hold the police in contempt and thinks they’re a vector of abuse and a menace to society.

Taylor is also a racist who uses racist slurs to demean white people she disagrees with.

In January Weil Heller School created a “21-Day Racial Equity Challenge” to remind their students how racist they are and make them ashamed to be white or asian.  The reading list reads like a rogue’s gallery of out of touch leftist ideology. Examples include:

The American people should be deeply concerned that David Weil is using his perch as the head of the Heller School at Brandeis to promote a radical and hateful agenda.