Chipman will reverse his “expert” opinion based on the cause of the day and who is supplying his paycheck. Chipman spent the last five years selling his services to Gifford’s left-wing, anti-gun group Americans for Responsible Solutions. While there, Chipman partnered with liberals around DC to crusade against suppressors. Why suppressors? Because leftists hate any firearms that Americans own, so they naturally extend that disdain toward anything connected to them.

In March 2017, Chipman’s organization was called out for lying about suppressors by Washington Post’s fact checker saying, “…ARS is especially wrong to claim that legislation to make it easier to buy such devices “does nothing to protect hearing.” 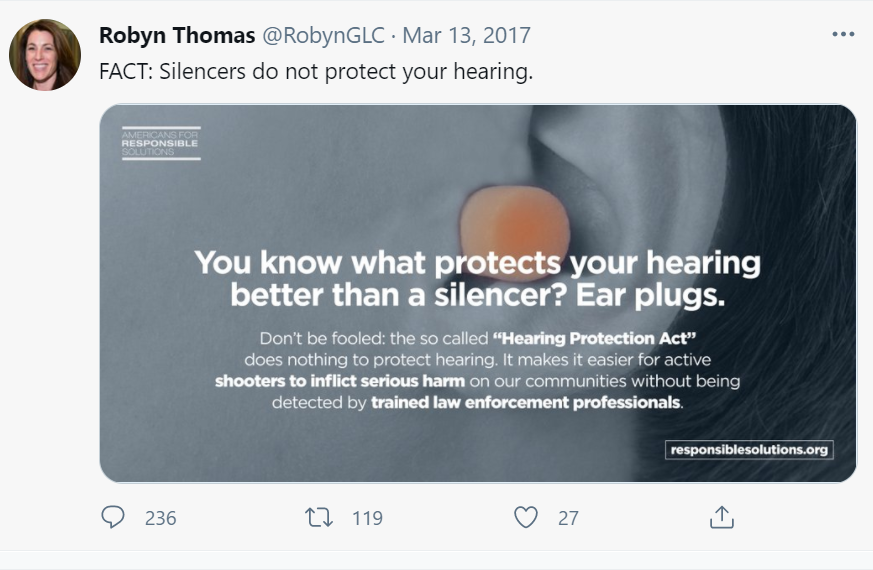 The same day his organization lied about the effects of suppressors, Chipman was quoted saying, “Anyone who has worked in law enforcement for as long as I have will tell you that silencers were not designed to protect hearing, they were designed to make it difficult for people to identify the sound of gunfire and locate active shooters.”

For context, in 2017, left-wing politicians and activists threw literally every argument under the sun against suppressors to see what would stick. The Washington Post labeled their statements misleading with Three Pinocchios.

When “expert” testimony was needed to disparage suppressors as a form of hearing protection, Chipman stated clearly that suppressors are loud and dangerous. In a September 2017 House Natural Resources hearing, Rep. Hanabusa asked Chipman whether a person still needs ear protection when using a suppressor. He responded “absolutely” and “if they cared about their ears” – all the while calling them “silencers” throughout the hearing. His underlying assertion was that suppressors are far from quiet and could cause significant ear damage.

Chipman: “Absolutely, you should always use hearing protection anytime you’re firing a gun with a silencer or not.” — “If they cared about their ears they would.”

Two years later, Chipman reversed his “expert” opinion on suppressors describing how they are used for tactical stealth with muted sound attributes.

“’The gun does not sound gun-like. It [suppressor] takes the edge out of the tone,’ Chipman said, adding that silencers are rarely used in mass shootings. ‘This is how I would describe it: It makes a gun sort of sound like a nail gun.’” —

“Exactly how loud doesn’t matter, said David Chipman, now a senior policy adviser with Giffords Law Center to Prevent Gun Violence. Silencers make gunshots harder to recognize. It changes the sound from a crack to more of a thud, he said.

“David Chipman, a former special agent with the Bureau of Alcohol, Tobacco, Firearms and Explosives says that the primary use of suppressors is tactical. He’s now a senior policy analyst at Giffords Law Center to Prevent Gun Violence.

‘The primary purpose is for someone who is on the offensive to maintain the element of surprise longer, and if that’s the intention of an attacker at a workplace, it’s really a recipe for disaster,’ Chipman says.”

Firearms are loud, even with suppressors. As Glenn Kessler explained in his Washington Post fact-check, “A 30-decibel reduction in theory means an AR-15 rifle would have a noise equivalent of 132 decibels. That is considered equivalent to a gunshot or a jackhammer. A .22-caliber pistol would be 116 decibels, which is louder than a 100-watt car stereo. In all likelihood, the noise level is actually higher.”

Even Chipman’s former boss at ShotSpotter refuted the claim that suppressors are quiet:

“In regard to gun silencers, it is more accurate to call them suppressors, as they suppress the impulsive sound of gunfire, not wholly eliminate it,” said Ralph Clark, the chief executive of ShotSpotter. “We have successfully if not inadvertently detected confirmed suppressed gunfire within our existing deployments.”

Which is it David? Are suppressors dangerous for your hearing because they are extremely loud or are they stealthily quiet, used for elements of surprise? You can’t have it both ways.

Chipman will use his access as a government insider to sell out to the highest bidder as we’ve already seen with for-profit company ShotSpotter. His record as a DC shill saying whatever is convenient for gun grabber Gifford is yet another example of Chipman’s dishonesty.

In a document retrieved by the American Accountability Foundation, Chipman is the author of a beginner educational course on guns titled “Firearms 101.” 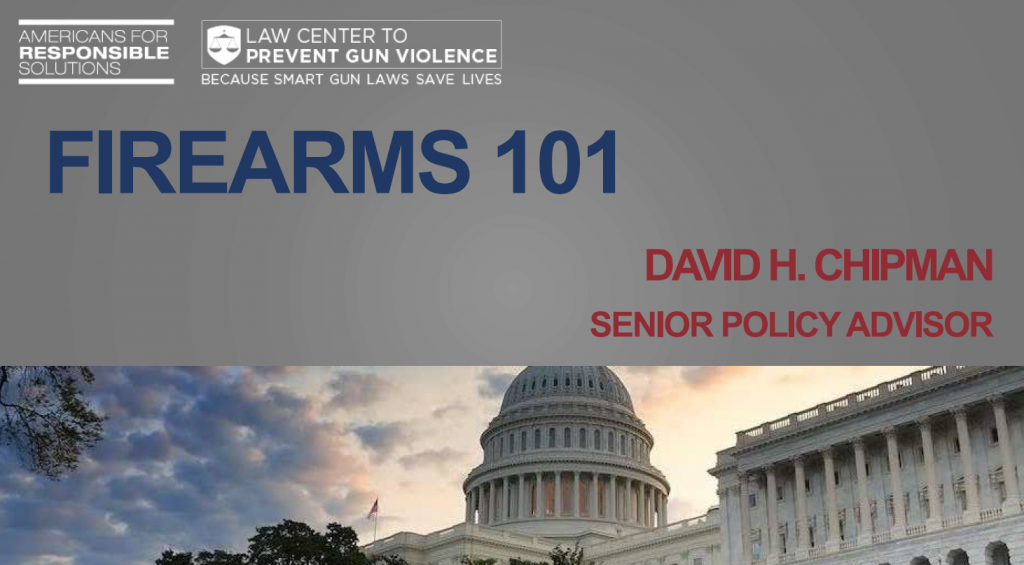 In the presentation, Chipman lists out three categories of Firearms: “Handguns, Long Guns, and Registered NFA Weapons.” All of which are inaccurate or slang terms for firearms. 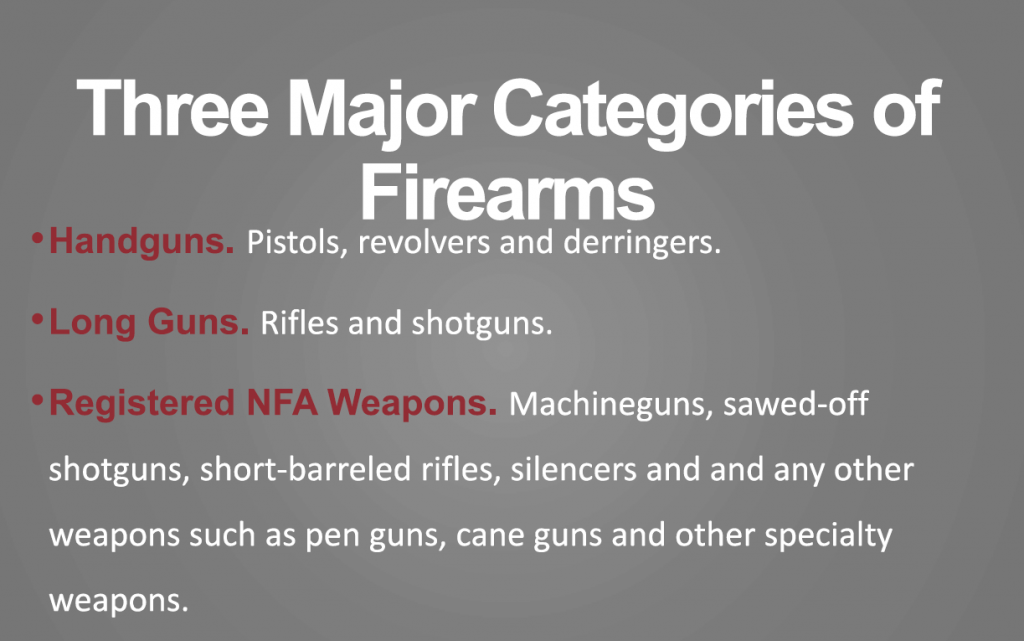 Then to invoke fear, Chipman shows slides labeled “Assault Weapons” with a picture of numerous ominous looking firearms. The kicker, not a single one of the labeled firearms is considered an “assault weapon” anywhere under federal law. 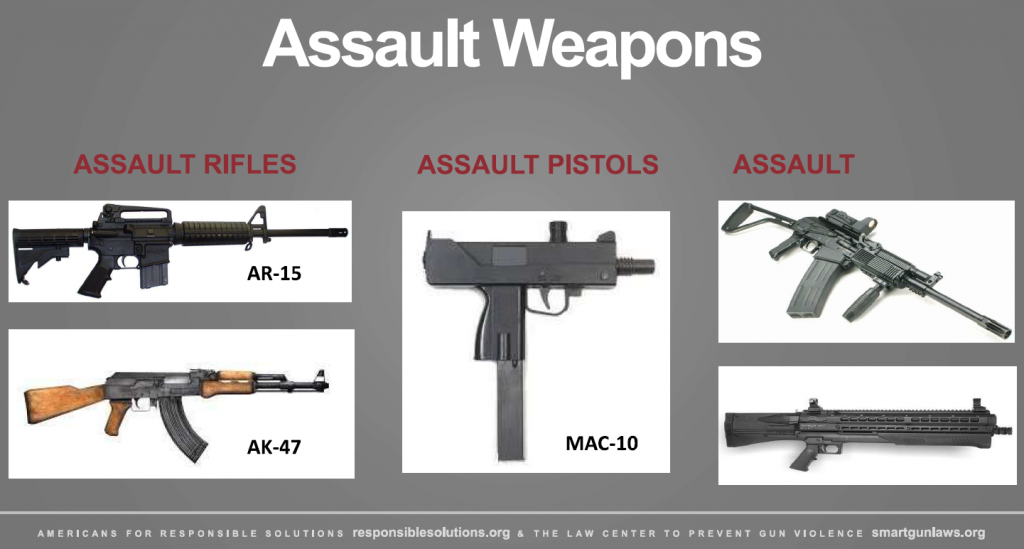 Guns are not classified by how they look (no matter how scary), but by their functions and components as defined under law (18 U.S.C. Ch. 44). Chipman’s old employer, the Bureau of Alcohol, Tobacco, Firearms, and Explosives (ATF), directly exposes Chipman’s lies with their online identification chart for firearms under the National Firearms Act (NFA).

Two of the guns labeled in Chipman’s presentation are actually under the category of a registered NFA firearms. According to ATF, both the AK-47 and MAC-10 are classified as a “machine guns” under the NFA when they have a fully automatic firing function. Also noted by ATF, when an AK-47 has a semi-automatic variation it falls under a separate designation, such as a rifle:

And the other “black scary gun” from Chipman’s presentation, the AR-15, actually falls into numerous categories of firearms under the Gun Control Act depending on how it’s built. It could be a pistol, rifle, a short barrel rifle, etc….

The point being, Chipman’s entire career as an “expert” is built on his 25 year service with the ATF and any experience he gained during that time. His actions to conjure definitions out of thin air are deliberate and calculated in order to advance an agenda in direct contradiction of the truth.

Evidence upon evidence piles up showing David Chipman is a paid ex-bureaucrat who will actively lie to push an agenda. His behavior is absolutely disgraceful, unethical, immoral, and disqualifying for anyone seeking an appointment in federal service.