Biden nominated the daughter of House Majority Whip Jim Clyburn to be the Federal Chairperson of the Southeast Crescent Regional Commission. Jennifer Clyburn Reed’s nomination to the post comes amidst allegations of nepotism from President Barack Obama’s former Director of the Office of Government Ethics. Many see Clyburn Reed’s appointment as payoff for Rep. Clyburn’s critical endorsement of presidential candidate Joe Biden during the South Carolina primary in 2020.

Reports as recently as last week suggest that Rep. Clyburn is not a stranger to using his political clout to get what he wants from Biden. Prior to endorsing candidate Biden in the SC primary, Rep. Clyburn asked the then candidate for a promise to appoint the first black woman to the Supreme Court. Biden subsequently made a public commitment on the national debate stage to do exactly as Rep. Clyburn requested.

Jennifer Clyburn Reed is not the first Clyburn family member to receive an executive branch appointment. In 2009, the Senate confirmed Jim Clyburn’s eldest daughter, Mignon Clyburn, to the powerful Federal Communication Commission (FCC) for a 5-year term. The FCC is the agency responsible for “implementing and enforcing America’s communication law and regulations”, including overseeing internet communication rules. Internet communication is a contentious issue of increasing magnitude due to the controversial censoring of political opponents across several social media platforms.

Clyburn Reed’s cousin, William Clyburn Jr., was appointed as a Commissioner to the U.S. Surface Transportation Board by President Bill Clinton and subsequently runs Clyburn Consulting, LLC in DC. It must be by sheer coincidence that Clyburn Consulting helps their clients navigate Washington’s legislative and federal policy priorities on the two issues where family members held appointments, Transportation and Telecommunications.

The appointment of Clyburn Reed is also significant because it comes with a full-time salary and the ability to direct potentially millions in federal dollars to specific programs. Unlike many Presidential Boards and Commissions which are honorific and do not provide salaries or governing authority for their members, the Southeast Crescent Regional Commission will provide Clyburn Reed a Level III Executive Salary at the tune of $183,300 or $168,400 if she is considered a political appointee.

This is not the first case of nepotism and the appearance of political influence to come from the White House Presidential Personnel Office. As mentioned in a previous report, Biden’s ambassador picks are Democratic mega donors, supporters, and party loyalists. Sen. Joe Manchin’s wife also received a plush appointment with a nice annual salary of $163,000 at a time when Sen. Manchin’s vote is critical for Democrats in a 50/50 Senate.

For Clyburn Reed, the six-figure salary will greatly exceed her income reported on her Ethics Disclosure form by roughly $60,000. One has to question if a 33% raise in income could happen to anyone or just the well connected within DC.

Appointments through nepotism benefit the political elite over individuals of merit. As Obama’s former Director of OGE points out, “The question is whether they bumped other qualified candidates because of their family connections.” He even recommends stronger measures to stop appointees from privileged backgrounds, like Clyburn Reed, that are insulated from the broader needs of the public.

As detailed above, the Clyburn political enterprise spans decades in Washington DC and continues with Clyburn Reed. In her ethics disclosure form, Clyburn Reed is listed as the senior campaign director with an annual salary of $45,000 a year for her father, Rep. Jim Clyburn.

Within the same reporting period, Clyburn Reed received $10,000 for “campaign strategy and GOTV (“Get Out The Vote”) fees” from her private consulting LLC, as well as a salary from the University of South Carolina totaling $41,622.

What exactly are Clyburn Reed’s qualifications aside from her family connections. Her LinkedIn shows she received a Masters in Arts and Teaching where she worked as a K-12 school coordinator and electives teacher for 24 years.

In 2015, she received her Ed.D from Nova Southeastern University, the same degree as Jill Biden, which is used primarily as credentialing for those seeking to be school administrators like a “teacher, principle, and superintendent” according to the NSUFlorida website. 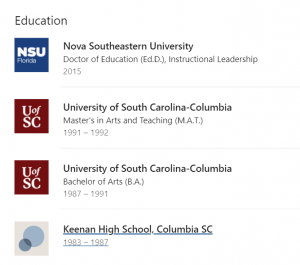 A coalition in favor of the commission cites the need to appoint a federal co-chair, Clyburn Reed in this case, in order to release an avalanche of tax dollars managed not by elected officials, but by the politically connected. 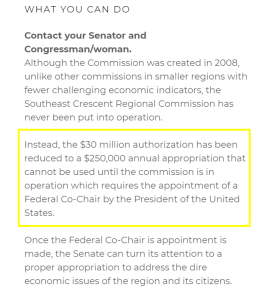 Recommending a family member to an agency you oversee as a member of Congress is a direct violation of federal law. The Committee on Ethics in the U.S. House of Representatives reminds all members of Congress of this very thing:

“Federal law, at 5 U.S.C. § 3110, generally prohibits a federal official, including a Member of Congress, from appointing, promoting, or recommending for appointment or promotion any “relative” of the official to any agency or department over which the official exercises authority or control.  The statute defines a relative, for these purposes, as “an individual who is related to the public official as father, mother, son, daughter, brother, sister, uncle, aunt, first cousin, nephew, niece, husband, wife, father-in-law, mother-in-law, son-in-law, daughter-in-law, brother-in-law, sister-in-law, stepfather, stepmother, stepson, stepdaughter, stepbrother, stepsister, half brother, or half sister.”

Jennifer Clyburn Reed is the daughter of Majority Whip Jim Clyburn. Did he influence the appointment of his daughter in any way in order to jumpstart her political career?

According to several sources, it’s clear that Clyburn Reed desires to run for higher office, maybe even her father’s seat when he retires. In 2019, Rep. Jim Clyburn told local papers that Clyburn Reed is his daughter believed to be the “best to run for political office.”

Questions of nepotism and possible violations of federal law must be answered with this appointment. How did a school teacher with no federal experience receive a fully paid position inside Biden’s administration?

It’s typical, as in the case of Gayle Manchin, for Senators to smile at each other as they unanimously confirm their colleagues’ friends and family. This should not be the case for Clyburn Reed until questions of nepotism, improper influence, and her qualifications are answered. Gayle Manchin was the Secretary of Education for West Virginia when she was appointed to her post.