Fighting for the Right to Discriminate Through Racial Preferences

While an activist lawyer at the Asian Pacific American Legal Center, Julie Su advocated for discriminatory hiring practices in California. She joined the left-wing ACLU to criticize a popular state referendum.

In 1996, citizens of California passed Proposition 209 that banned the state from discrimination based on race, sex, color, ethnicity, or national origin in public hiring, contracting, or access to education.

The people of California adopted Proposition 209 by a vote of 54%-45% adding the above equal rights language into the state’s constitution. Activists on the Left, including Julie Su, attacked the popular equal rights protection in favor of racial preferences.

Julie Su, along with the ACLU, praised U.S. General District Court Judge Thelton Henderson’s attempt to stop the implementation of Proposition 209 shortly after being passed. She cited the constitutional concerns with the measure saying,

“…laws that have been passed for the majority of the moment which were eventually overturned because they went against the Constitution.” 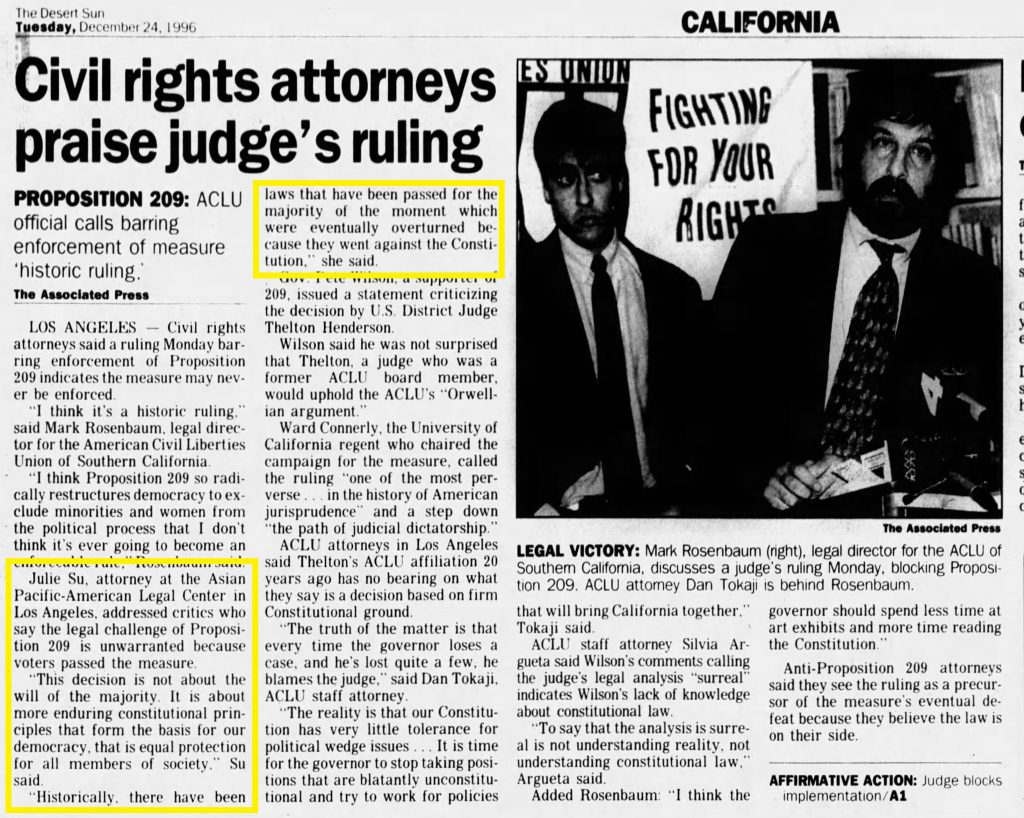 Courts disagreed with Su and her cronies’ analysis of constitutional rights. The 9th Circuit Court of Appeals quickly overturned the District Court’s decision allowing Proposition 209 to protect citizens of California from discrimination for 25 years through the present.

Many attempts to challenge Proposition 209 have failed, including another ballot initiative in 2020. Proposition 16, which would have brought back hiring practices based on racial preferences, was soundly defeated by a larger majority than before, 57%-42%.

In agreeing to allow discrimination based on racial preferences to occur in the workplace, Julie Su reveals how she is on the wrong side of equal rights, the Constitution of the United States, and the American people.