Biden’s Postal Board and the Future of Elections: Amber McReynolds

Biden nominated three Democrats for the United States Postal Board of Governors, Amber McReynolds, Anton Hajjar, and Ron Stroman. These three would join two other Democrats to make up a majority of the Governors if confirmed. Biden actively attempts to pass off McReynolds’ political party as “Independent” in order to stack the Board Governors with more Democrats than the law allows. Nonetheless, McReynolds’ history of joining left-wing advocacy causes and her own personal actions makes this classification laughable.

Biden and his fellow liberals want to control elections going forward. They reaped the rewards of mail-in-voting in 2020 and know that the United States Postal Service is pivotal for the same control in upcoming elections. The left’s own Washington Post reported the same sentiment:

“Congressional Democrats had pushed Biden to move quickly on the nominations…The move is a potential boon for voting rights groups, which have pressed Congress to use the Postal Service to expand vote by mail access as a firewall against Republican state legislatures that have introduced bills to do the opposite.”

McReynolds is a liberals perfect choice for controlling elections from the Postal Board.

Why does the party affiliation of a nominee even matter? First, it is a matter of perception. An “Independent” label conveys some aspect of neutrality on the part of McReynolds – i.e., that her actions are for the good of Americans, devoid of traditional partisanship. Based on her past activities and current alliances, applying an “Independent” party affiliation to McReynolds would be the same as dressing a wolf in sheep’s clothing.

Ultimately, it allows leftists to maintain control of the USPS governing board for as long as possible and with as many members as possible. By law, no more than 5 Governors may be from the same political party. With 9 total spots, liberals can only fill a maximum of 5 with their own people, unless of course they slip someone into one of the Republican spots. However, if they were to confirm Amber McReynolds as an “Independent” then it would leave another spot available for a Democrat at the next Republican vacancy. In other words, this would allow leftists a loophole to circumvent the very law intended to prevent long-lasting partisanship control of the USPS leadership.

The good news is Biden does not get to conjure McReynold’s party affiliation based on his personal preference – that responsibility is left up to the Senate alone and is based on the history of activities of the nominee.

The first measure of determining political support is to check the campaign contributions of the individual. Amber McReynolds had one FEC report on file – a $100 dollar donation in 2018 to then Democrat Candidate Tina Smith routed through ActBlue. 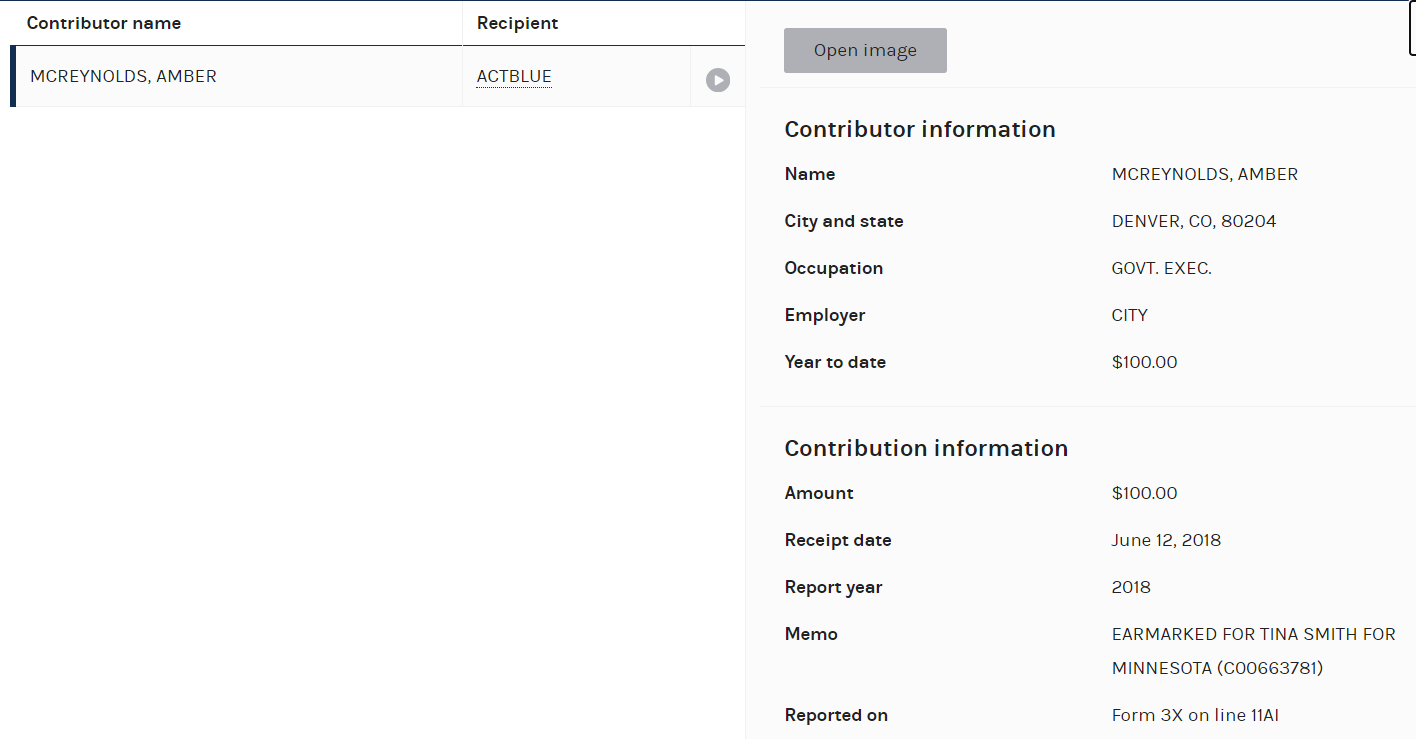 McReynolds’ recent 2018 donation is to a Democrat candidate in a national race even though her current voter affiliation is listed as “Unaffiliated.”

We know she voted in a Democratic primary in at least one election. According to a Voter Profile released to AAF by the Colorado Secretary of State through a public information request, McReynolds voted in Colorado elections consistently between 2005 and the November 2020.

Prior to 2016 and before the passage of Colorado’s Proposition 108, “…a voter was required to be affiliated with a political party in order to vote in that party’s primary election.”

McReynolds switched her party affiliation from “Unaffiliated” to “Democrat” in order to vote in the Democratic party primary election on August 10, 2010. 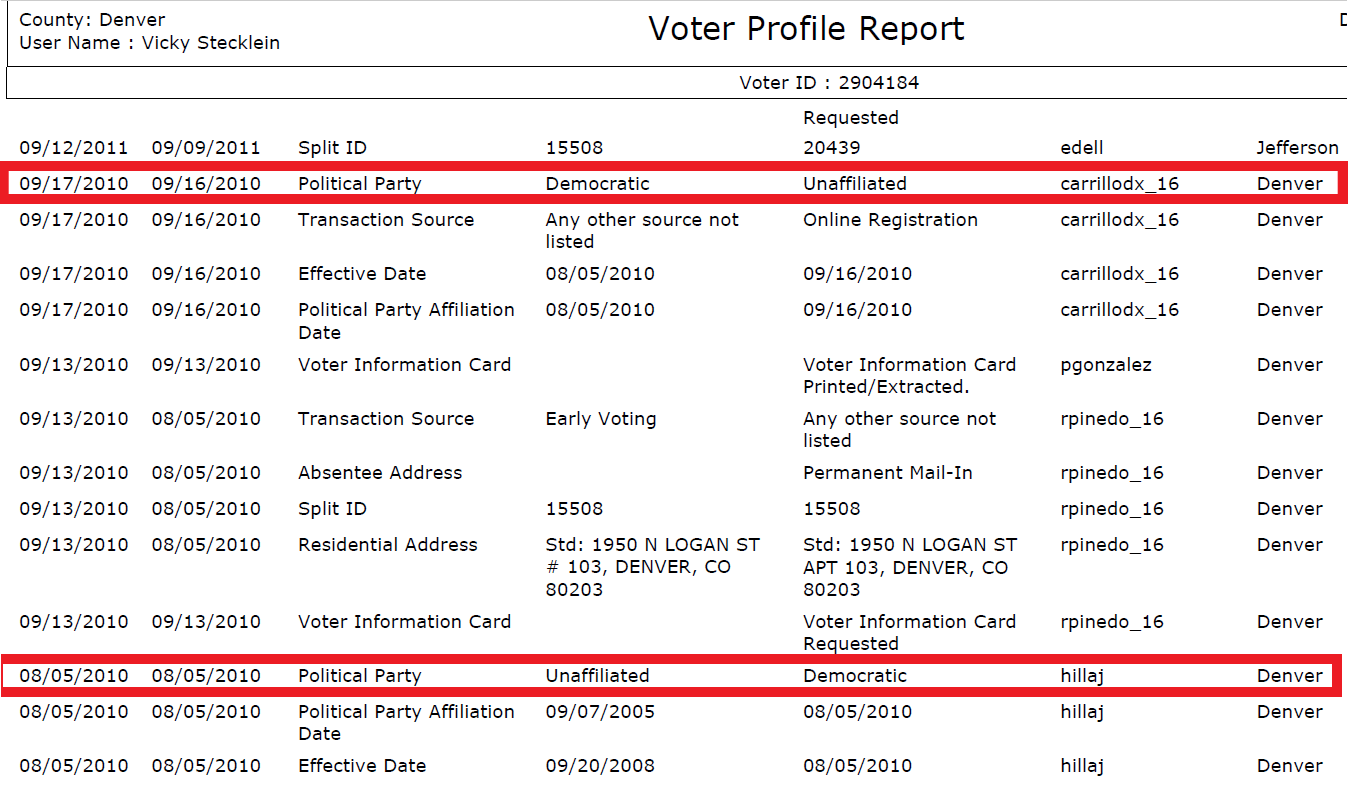 Following the primary election, she switched her party back to “Unaffiliated” and didn’t vote in another primary until 2018.

Based on her voting profile, McReynolds voted in the following primary elections:

As an unaffiliated voter, McReynolds would have selected which party ballot she wanted for each primary. She is currently listed as a “Confidential Voter” which limits public access to personal information.

McReynolds doesn’t have to say who she voted for, but she should release documentation on what party ballot she pulled for the Primary elections in 2020 and 2018.  This is nothing new, nearly every state discloses which ballot an individual selects when they vote in an open primary.

This information is vital for public transparency and to understand whether she truly is an “Independent.”

In her current role as CEO of the National Vote at Home Institute, McReynolds partners with and is in leadership positions with several left-wing advocacy groups, including as a Board Member of RepresentWomen. The Washington Post reinforced this point when it referenced McReynolds’ group as, “a darling of left-leaning groups” in its February article.

Recently, she thought it wise to remove the list of lefty partnerships from her organization’s website. AAF managed to save a snapshot of the partnerships before it was removed with notables including the ACLU, Democracy Fund, Rock the Vote, and League of Women Voters. 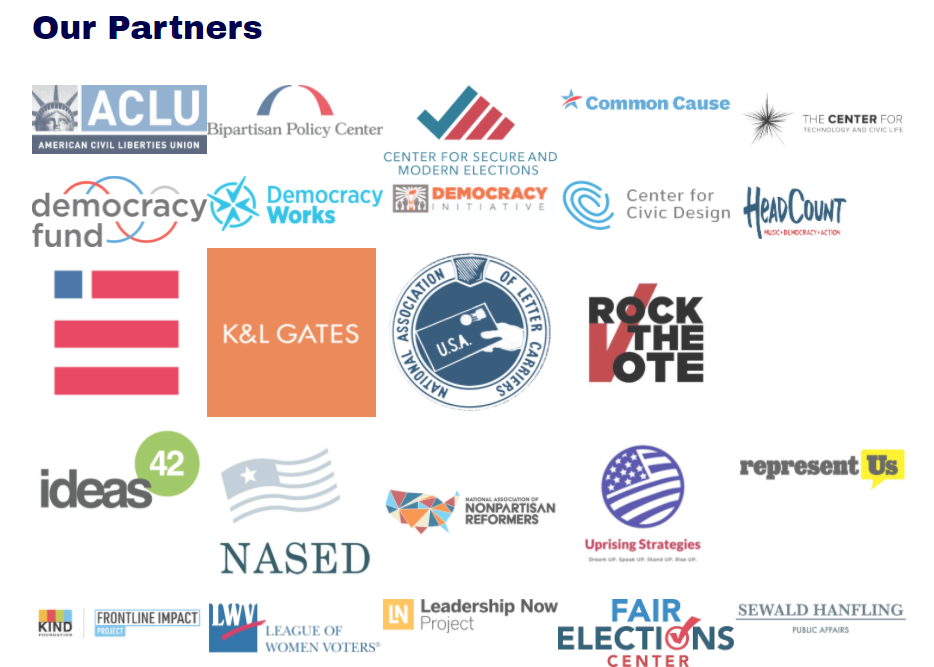 Amber McReynolds is not an “Independent” or “non-partisan” as Biden and his liberal allies would like you to believe. Her organization furtively hides its left-wing affiliations after her nomination was announced, and she personally supports Democrats at the ballot box and with her own money. Liberals want to control the future of elections and nominating liberal Democrat Amber McReynolds to the Postal Board is one mechanism.

***Current breakdown of the Postal Board: