For lawyers, law school is the formative years where they develop their world view and understanding of the law and its role in society.  That is why it is often helpful to look to a nominee’s work in law school to get an understanding of how they view the world and how they’d behave were they appointed to a position in the federal government.

Kristen Clarke, President Biden’s nominee to be the Associate Attorney General for Civil Rights, has a seriously troubling record as a radical anti-police and anti-Semitic activist when she was at the Columbia University School of Law.

Most troubling is her work in 1999 to organize a conference to defend convicted cop-killer Mumia Abu-Jamal. 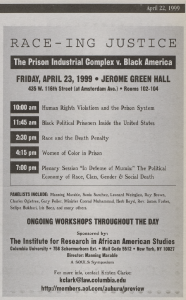 The Officer Down Memorial Page provides a chilling description of the brutal murder of Officer Danny Faulkner by Mumia Abu-Jamal in 1981.

The suspect attempted to flee but fell to the ground several feet from where he had just shot the officer. When back-up officers arrived, they found Officer Faulkner mortally wounded and the suspect, murder weapon in hand, laying several feet away.

Mumia Abu-Jamal has been a rallying cry for the radical anti-police left despite the fact that Pennsylania courts have repeatedly refused to overturn his murder conviction despite three decades of well funded leftist appeals.

Three years before he appears at Clarke’s event, the New York Times noted:

“Mr. Muhammad lashed out at Assemblyman Jules Polonetsky, a Democrat of Brooklyn, on WCBS-AM radio on Friday for what he said was the pulling of political strings to end the group’s contract. Mr. Muhammad repeated his comment to a newspaper reporter after he left the radio station. ‘I called Polonetsky a snotty Jewish politician and he is in fact that,’ Mr. Muhammad told The New York Post. ‘He was able to twist the arm of one of the most powerful governors in the country. The Governor was bowing to the will of this lobby.'”

Four years before Clarke’s event Minister Muhammad was pedling in the worst anti-semitic attacks when he spoke at Hofstra University stating:

“many in the Jewish community, particularly those in leadership positions, seek to control black people.”

Conrad Muhammad was a right-hand man for notorious anti-Semite Nation of Islam leader Louis Farrakhan.  Muhammad’s hatred and scapegoating of Jews was well known, yet Kristen Clarke still wanted to amplify his voice and give him a platform.

‘‘ ‘I called Polonetsky a snotty Jewish politician and he is in fact that,’ Mr. Muhammad told The New York Post. ‘He was able to twist the arm of one of the most powerful governors in the country. The Governor was bowing to the will of this lobby.’ ”

Organizing activists in New York in defense of Abu-Jamal during law school would not be Clarke’s last time as part of the team defending the cop-killer.  After she graduated from Columbia Law School, she went to work for the NAACP Legal Defense Fund working for one of Abu-Jamal’s most prominent lawyers.  During her tenure she was working directly for Dego Adegbile who ran the litigation department at the NAACP and took the lead in getting the organization to defend Abu-Jamal.

As the Washington Post notes, “Adegbile, while working for the NAACP Legal Defense Fund, had participated in the preparation of a legal brief filed on Abu-Jamal’s behalf.”   As Adegible noted during his confirmation hearing in the Senate in 2014 for the same position Clarke is seeking today, “In my role as Director of Litigation, I supervised Ms. Clarke and the entire legal staff at the NAACP Legal Defense Fund.“

By joining the legal team defending Abu-Jamal in federal court, any doubt that Kristen Clarke is a fellow traveler with the worst anti-police leftists who have no respect for the sacrifice that the men and women in blue make to defend our communities.